Originally named Philippine Animé back in 2004, A Glimpse Into The Horizon was a fansite collective. 'Til the end of 2008, it only had three sites: Flaming Arms, Seek Out!, and Live. Love. Life. (now a fanlisting). With the advent of wikis with insurmountable information, it progressed into a graphics resource site and fanlisting collective after moving out of GeoCities and FreeWebs. Everything lives up to this day, because there's really no harm in keeping what used to be.

The name originated from the domain glimpsed-horizon.net previously pwned by a then highly-regarded young girl who apparently loved hopping from one domain to another. Of course, the domain's been long dead by now.

Updates may not be frequent from time to time but there's NCIH that this place is going down especially that a lot of programming, purely out of interest (no, I'm not gonna say "passion" because that's a lot of cheese), watered it back in the day. Alongside rewritten URL's, a Content Management System coded from scratch keeps everything in order.

Version 3 features characters from Hiiro no Kakera. Took interest in the picture particularly the way it looked when it was duplicated and the blending mode was changed. Again, no brushes were used on this one and hardly any layer completed it. 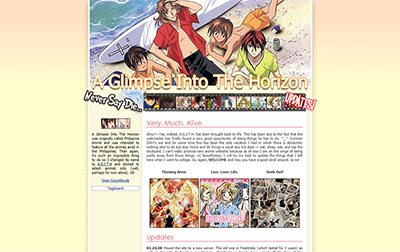