Ahoy! Welcome to Flaming Arms, a Filipino fansite dedicated to the animé Flame of Recca. This site has been up since July of 2004 but has poorly been getting hits ever since. But enough with that. ^_^' What matters is that it's here to stay. Site is maintained by Nelson. May you enjoy your stay! :D 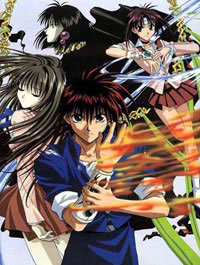 Flame of Recca is a story of a teenage high school student who has his own ways of getting out of trouble—like a Ninja. But he was actually born 400 years ago, in a Ninja Village called Hokage. He finds out about his true past when a mysterious lady named Emma Kage Houshi appears and gives him lots of troubles which he could not easily escape.

Due to SSL "issues", moved this place (as well as Seek Out!) out from its own subdomain to be with the rest of the anime contents.

Also taking this opportunity to share that last January 30 someone messaged me on Facebook (apparently I had my full name shouting in the footer) on how he stumbled upon this site while trying to recall Kaoru's last name. With the Internet age today and wikis everywhere, I'm sure he managed to do so by searching "Lorcan" (you see, for some reason Philippine TV networks back then don't always use the characters' Japanese names). "Sobrang nostalgic", indeed!

Oh, yes. After almost three years, an update is here. New layout and I reread everything and made a few edits. Can't believe I was using too much compound sentences then!

Not a major update actually. Just added the Japanese names of some characters since I've been using the names used by the dubbers here in the Philippines. It was also requested by some visitor.

It's been quite some time since I last updated. The layout's new and I hope it's here to stay. Additionally, I've abandoned GeoCities because of their ads. Credit for the image goes to [insert URL here] (sorry, forgot it again).

I have finally made the final retouches of all the pages and added all the images needed and I could find and I think I've really had it. I'm done with this site and I'll do my best not to look at it again and simply focus on my Hunter X Hunter review. Arrivederci! All images used are copyright and belong to their respective owners. Sorry if I forgot the URLs.

Flame of Recca Page completely done after all the troubles I had. A number of images are still on the loose. Credits go to firetigeress for most of the profile images. I think that's all for now. Till next time!