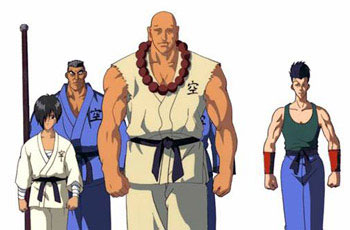 Dylan equaled the ability of Daikoku's weapon with his Ensui by pinning his sword to the tip of Daikoku's stick (similar to that of stopping an electric fan by pressing on the center, instead of touching one of the blades) everytime an attack is made. The self-rotating stick was destroyed in the end.

The fight ended up in a draw because Max did not immediately use the Kuchibasyo. He let Minamio injure him first because he, like some other cocky characters, believes that lead characters should experience it before grabbing victory. Still, it was a bad move. Max impresses Kuukai, the team leader of Kuu, for controlling the Kuchibasyo as if it was part of his body.

Aira defeated Fujimaru with only her underwear on. Fujimaru was some sort of maniac. He tore Aira's clothes fabric by fabric by his sickles. He even cheated that almost made Aira standing naked in the arena. Aira, with the help of her "Flying Tail" attack, won.

Saicho surprised Recca by putting out his fire with paper—"Cyclone Paper Dance". Recca was wrapped like a mummy but was still able to go free by the help of Saiha, one of his eight flame dragons. Finally, when the fight did not end after ten minutes (Saicho's limitation), Saicho was instructed by Kuukai to use the 1000 swan origamis made by Maita. This final attack failed because all the paper works were simply burned by Nadare's (another flame dragon) rising fire balls.

This fight was not supposed to happen. It was because of Recca's 'arrogance' that the two teams ended with a pact that the first four fights be invalidated, meaning that the team that will will be the one to certainly move on to the second stage. Kuukai's real purpose was just to teach Recca on how to become a real warrior. He even told Recca to decapitate him because he wanted to sacrifice his life for the honor of their team. Of course, Recca did not do it. It made Kuukai really mad that he decided to kill Recca for real. Luckily, a new dragon, Humura, helped Recca end the fight.