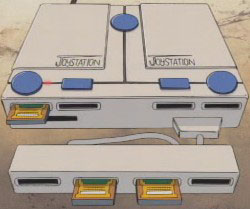 Greed Island is the game that was created by Ging together with his friends. This game is especially created for people who know how to use Nen. It is a game where your own body is needed to play the game. The game also needs the Joy Station game console for you to play the game.

This game is originally created just for fun but unfortunately, this game is very hard that the other players started to kill other players for the sake of getting an item to finish the game. And also, many bad players have started to play it like the Spider. The game is also created for Gon by his father and his friends. If anyone plays the game, his or her Nen level will surely increase for this game packs a lot of exercises and activities to do like breaking mountains using Nen.

The game takes you to an island where you will meet people. You need to interact with these people in order to help you to proceed to the next level. The game has ten levels. For you to save the game, you need the item needed for saving the game which is located at the fourth level. You also need a memory card to where you will save your data. After saving, you can go back to the real world but you need to go back to the game before ten days because your saved data will be erased. For you to load the data which is saved in the memory card, you will need the Ring.

How to Play the Game

In the game, there are two basic magic words. These words are "Book" and "Gain." When you say "Book," the binder where you will put your cards in will appear. You only need to place your hand where you are wearing the ring in front of you then say "Book" then the binder will appear in front of you. In the game, you won't find any cards. You need to change the items you got first into cards before you put them in the binder. Once the player touches the item, it will automatically change into a card (see right).Whenever you need to use the card you got, just get it from the binder and say "Gain" and the card will change back into its original form. But when you used the word "Gain" to change the card back to its original form, you can't change it back into its card form again. So, if you want the same item again, you will need to earn that item again. 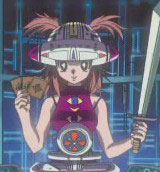 There are two other cases in which you cannot change an item into a card. One is when the card's transfer limit has reached its maximum.

There is a transformation limit for every card that exists on this island. Some item card limits are over 100 and there are some item cards that have a maximum limit of only 3. In the case of the cards that have a limit of three, if other players transform the item into a card before you do, then you can't transform the item into a card even if you have that item (see left). This case happens when the card's transformation limit has reached its maximum. The other one is a race against time. If you have earned a card, you need to put in the binder before one minute passes. If you don't, the card will change back into its original form again and you cannot change the item back into its card form again. 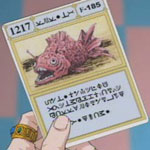 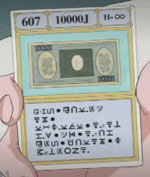 In the game, you also need money to buy what you want and what you need. In order for you to get money, you can trade the cards you earned into money into the trade shop.

Did You Know? That the name "Greed Island" comes from the first letters of the names who created it? Here, I'll give you some names. "G" in Greed means Ging. Ging is the first for he is the one who pioneered the game. "R" is for Razor. He is in charge of removing players who entered illegally (By riding on a boat or an airplane to the island). He doesn't kill those people. Instead, he uses a very special spell card known as the "Eliminate" which transports the illegal players back to the original world. "E" (first) stands for Elena, the twin sister of the Receptionist. Elena can be found in the southern exit of Greed Island. The other "E" is for Eeta (pronounced as I-ta). Eeta has red hair and is the one who receives players who are entering the game. Yup! She is the receptionist seen above. "D" stands for Dwun. Originally, Dwun's real spelling is Wdwun (how do you pronounce that?). The "W" was removed by Ging (without consulting Dwun) in order for it to fit in the name "Greed Island." "L" in Island (I Think) stands for List. List is a very cute guy, although he is now a middle-aged man (Around 20s or 30s). The other letters remain a mystery. It wasn't mentioned in the OVA 3.