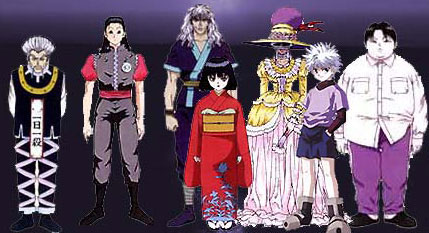 The Zaoldyeck Family is the longest clan of assassins. Each member of this family can be paid to slay and massacre. They don't even care if the client of a member is the target of another member as long as they earn money. Members of the family are legendary for they are seldom seen negotiating with 'normal' people. At the top of Kokolo Mountain in the Island of Padokia, stands their house. Their land is unbelievably wide and the world beyond their gate is very different. The Zaoldyeck Family is Killua's family.

Silva is Killua's father. His hair is similar to those of a rockstar. He is very confident that Killua will someday follow his steps for he let go of Killua when Gon, Kurapika and Leorio came to their land to 'rescue' their friend.

Five years ago, Silva had an encounter with the Genei Ryodan. Fatefully, he won - which means that he's really strong. He is mysterious in a way that you know nothing more about his personality except the fact that he is an assassin.

A thing is still very catchy: It was also five years ago when the Kuruta Tribe (Kurapika's) was all killed by the Genei Ryodan. Quite a bit funny, right? Here's what me and my friend theorized: Five years ago, Silva was paid to slaughter the said tribe but the Genei Rydan entered the scene with the same objective. They fought and Silva won and was able to escape but was inopportune enough to get the scarlet eyes. 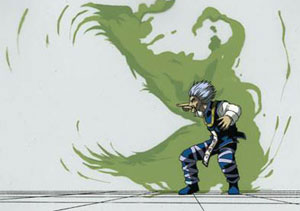 Being the oldest member of the family, Zeno has a lot of fighting experiences as an assassin than the rest of the family members. He is unbelievably strong despite his age and is rather short-tempered. Cash is his utmost priority. He can be described as "old but terrible."

Zeno is one of the best assassins that ever lived. When York New City was invaded by the Genei Ryodan, Zeno and Silva was one of the professionals hired to eliminate them. All the other experts were killed except the both of them. He shows his Nen ability in a form of a dragon when he and his son fought with Kuroro.

Kikyou is Killua's cyborg mother. She looks like Cyclops of X-Men. She is a caring and overprotective mother who is not strong-minded enough to stop Killua from doing things out of her command.

Illumi is the eldest child in the Zaoldyeck Family. Unlike any other television dramas, Illumi is not the child who is planned to inherit his father's possessions even though he's the eldest. Illumi has an expressionless face and cold black eyes that looks like an unending tunnel. He is Hisoka's bestfriend (?).

Illumi's weapons are pin needles. He uses it to kill people or change his physical features. When he joined the Hunter Exam, he used these needles to hide his true identity in order to monitor Killua under her mother's command. He named himself Gitara Kuro and he acted like a total idiotic robot. He appears to be the closest to Kalluto.

Milluki is obviously an assassin who doesn't look like one. He is fat for he eats a lot and is absolutely jealous on Killua's attention from their parents. He is a game addict and computer expert.

When it comes to killing, Milluki is probably the only Zaoldyeck who won't shed blood. He uses the product of technology such as bombs to kill. His greatest dream is to have a bomb on a fly and get that fly flutter to his victim. His only problem is, how will he tell the fly to do so??

Kalluto is the youngest child of the family. His eyes are exceedingly like Killua's. He is usually seen tailing her mother.

Kalluto appears as the closest to Illumi (perhaps because Illumi is the eldest and Kalluto being the youngest). He was with Illumi when Illumi killed 'The Elders' who hired Zeno and Silva to kill Kuroro and when Illumi went to the Genei Ryodan's hideout to pretend to be Hisoka. He even flaunted herself to Franklin and Bonorenolf before finally escaping and leaving his brother.