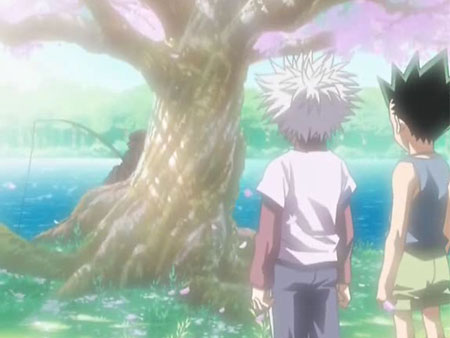 At last, the trio reached Masadora. Biscuit bought digging materials but what for? To strengthen your Nen, of course. Think of the shovel as a part of your body so that the digging power of the shovel will increase!

Gensuru is the bomber. He killed everyone in their group except the one who has the power to exterminate casted Nen. Who is he? His name is Abengame. Why? Killua, the hunter Exam is near. You have to get out of the game before the exam registration ends. How will you get out? Leave on!

Gon, when did you meet Kuroro in the game? What? Kuroro? I haven't met him in the game. The Nen remover is called "Jonen." You mean Kuroro had already removed the Nen of Kurapica and entered the game? There is only one answer: Kuroro is not Kuroro. Hisoka used Kuroro's name when he entered the game! Besides, Kurapica will sense it if his casted Nen was removed. Gold Dust Girl, Getto!

Chezguerra's group was tricked by Gensuru's group. What will they do? Just let them go and let us mind our own business. Lucky! Gon's group got the "Lucky Alexandrite," a rare card! The man that snatched the "Sword of Truth" from Gon and Killua contacted them. Why?

It seems that the group must fight Razor to get the "One Acre of Coastline," a very rare card. But the group is really weak so, they dismantled the group to search for stronger group mates. Hello again, Hisoka! What a sight!

Chezguerra's team, Hisoka, Goreinu, and the trio are back to fight Razor in the sporting event. Will they be successful this time around? Boxing-winner. Bowling-winner. Will these winning streaks cease?

Dodgeball! AHH! Oh no! Will they win? Razor is in the game now. Rememdeer, he is one of the creators of the game. That means he is one of the strongest persons around. Go, Gon! You can do it! What is that great idea you are talking about?

Yes! Gon in front, Killua in the middle, Hisoka is at the back. They blocked the fast ball!!! YES!!! Wait, the ball is coming back. Hisoka, it is time for your bungee gum!

The replacement of Hisoka has shown up in the game. Who is that person? It is Karuto (Callyt), the little sister of Killua, the one who is always seen wearing her small Kimono. The Nen Exterminator is found. Will he co-operate with the Spider?

The battle is still going on. What will Gon do? Will he follow Biscuit's orders and keep attacking Gensuru? The best defence is the best offence. "I usually let my enemies hit me so that they'll have something to remember..."

This is not a fight of the body but of the mind. Gensuru used his true ability against Gon. You can do it, Gon. Don't give up! Just like Bisuke said, "He puts more aura on his hands than into the explosive attack." Don't be selfish, Gon! Follow Biscuit's plan!

Gensuru's condition to set the Timer was met. But Gon's condition was met too. Who will win this battle? Gon or Gensuru?

At last! Greed Island was cleared by none other than Gon Freecs! He got the highest score in the quiz making him the official winner of the card no. 000. Gon, Bisuke, Killua, you get three cards for finishing the game. These three cards can be brought outside Greed Island. For Bisuke, Blue Planet. For Gon, The Necklace and for Killua, One Acre of Coastline. Matte!!! Killua gave way to Gon and he gave his card to Gon. The real card is Accompany. Why choose that card? So that they can be transported to Ging Freecs, of course. Wait... Abengame is back for his fortune as a Jonen-shi. What will he do for Kuroro/Hisoka?