Note: The first three selections below are not official Hunter Exams. 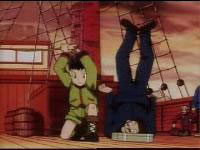 The First Test: Journey through the Sea

After catching the biggest fish on the island, Gon left her aunt to start his exploration. On his way to the ship that leads to the place of the Hunter Examination, he met Leorio. Kurapika was introduced in the ship sitting all by himself. The captain of the ship was astonished when Gon told him that a violent storm is forthcoming. According to him, Gon was the second person to tell that a calamity will come (Jin Freecs was first). Everyone was panicking when the storm struck the sea except for Leorio (who was busy on an apple), Kurapika (who was napping on a hammock) and Gon (who was giving first aids to his fellow aspirants that got seasick). The warm-up test was basically to test the aspirant's calmness in times of trouble. When the sea once again became tranquil, the Captain congratulated the three for passing the test. 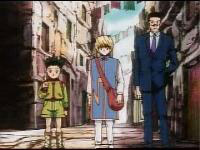 The Village of Questions

After alighting from the ship from Whale Island, the three were given instructions by the captain to take the path to the mountains leading to a house under a tree overlooking the whole island. They were accompanied by a stranger who has an axe to grind. On their way, they came to a small village with weird, masked girls and an old lady who would only let them pass if they'll be able to answer certain practical questions. The old lady asked them and the stranger answered first - confessing that he only joined Gon's party for protection and company - and after giving his answer, the ladies let him leave the lot behind. The next questions, which were "If your son and daughter would be both kidnapped, who would you rescue among the two?" and "If your girlfriend and mother would be taken by bad people, who would you prefer to save?" was asked to the three of them. They took moments to decide that made Leorio angry and almost made him harass the old lady. When Gon and Kurapika heard the stranger's scream and yet they still haven't given any answer, they knew they had already passed the test. The purpose of the test is to establish your way in making a wise decision. It would be very unfair to rescue one among two lives that are both important to you. Thereafter, the girls opened a way that leads to the next destination.

They emerged from the tunnel they took that takes two days to walk and came to a forest. When they arrived and entered the said house beneath the tree, they were welcomed by a menace-looking and winged creature holding a lady and her husband being injured on the floor. The creature immediately flew out of the house and Kurapika and Gon chased after it leaving Leorio for the care and safety of the man. The two chased and chased the creature until it 'accidentally' lost its grip of the girl's arm. Kurapika stayed with the girl for security while Gon didn't stop hounding. Kurapika then started suspecting the girl's tattoos in her arms - for it meant that she should never marry a man in her life and that how come she has a husband. Leorio was requested to get an herbal medicine for the wound of the man. Then simultaneously, the girl in Kurapika's companionship confessed her true personality, Leorio being attacked by another winged creature whom he recognized as the man he was supposed to cure and Gon being almost-clawed to death. Secrets were subsequently revealed including the one that the creatures were truly a family with a boy and girl sibling. The father creature was astounded by the way Gon recognized him different from his wife when he tried to slash Gon after saying "You'll pay for what you did to me." and Gon never moving for he knew that it was the mother creature whom he hit with his rod a bit earlier. They too, are part of the test and is the only way to arrive at the true Hunter Examination place in no time. Eight wings fluttered and Gon, Kurapika and Leorio were taken away to their true destination.

The next test was held in an underground. The three was the last to arrive before the examiner arrived to start the test. There are a total of 405 applicants and among them, stood those who are head-turners such as Killua and Hisoka. The test's intention is to test the physical strength and ability of the examinees. Tomba, an aspirant in his 35th attempt, is famous for bringing down those who are newcomers. He used his skill in cheating to drive insane two of the newcomers including Leorio by taking them to a plant which produces nectars of illusion that shows a horrible part of your past that you don't want to remember. Gon and Kurapika came to the rescue but was also about to go crazy when Killua appeared with bombs to the rescue. They destroyed portion of the wall and was able to catch up with the others. The number of people who reached the opening was so little that it didn't even reach half of the original bunch. Gon, Leorio and Kurapika were very glad they made it and Killua, becoming their friend.

After the mind-boggling race under the ground, they reached a forest at the end of the passageway. Another race was also then again executed but this time, with the forest itself and the creatures resting on it. As they were following the examiner, the fog was becoming thicker and thicker every minute. The applicants were also becoming lesser and lesser for some were already being killed and eaten by wild magical animals. Killua and Gon were together and Kurapika and Leorio on another group. Hisoka started killing his companies without any valid reason. Leorio challenged Hisoka but was not strong enough and so was Kurapika. Then Gon came and fluffed up Hisoka with his rod by the face. Hisoka was impressed by Gon's ability and so he left them safe and untouched (not really). Minutes of running and they arrived in a clearing with a house. The examiner named Sototsu then told them to wait for the second part of the exam to begin.

When the door of the structure opened, it was the signal for the beginning of the second test. The Hunter applicants were welcomed by a pink-haired lass with a bizarre hairstyle and a fat man - both Culinary Hunters. Many grunted as they said that the second test will be all about cooking. Mench ordered foods and your cooking should be her taste or else you'd fail. She was so good in tasting for she always knows what is lacking in a dish - even if it is just a grain of salt. After tasting many dishes made by the applicants but still she didn't like one, Mench said that she doesn't want any food anymore and that nobody passed her exam! It was only the chairman of the Hunter Association who convinced her to give the aspirants another chance. And so they went to a plateau with hanging nests of Spider Eagles on the edge. The test was merely to get an egg yourself and boil it. No sweat, neh!?

The Tower of Entrapment

After the cooking challenge, all the hunter applicants who passed were carried by an air balloon vehicle (whatever do you call that thingy) into a gargantuan tower. An aspirant instantaneously tried to get down by the edge of the building but was carried away by flying creatures. It was then that the applicants realized that they'll have to get to the base of the structure by finding a secret passageway from the top. They were given 72 hours (3 days) to complete the task. Gon and his company (together with Tomba) faced a lot of troubles but were still able to arrive at the floor of the structure just before the last minute. 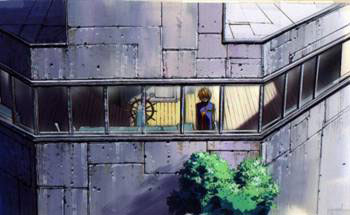 The Island of Lost Ships

This is a special test prepared by the same hunter-examiner on the Entrapment Tower. The applicants were all left in an island of dozens of lost ships. An old couple lived there with a ship being made as a hotel and you can only occupy a room if you'll be able to pay them with treasures that are found on the wrecked ships all around them. After an exhausting day of seeking valuables, all the applicants took a rest. By dawn, the couple left the ship by the air balloon vehicle leaving the treasures the applicants vigorously gathered. As they watched the couple leave, it was a signal for them that the test has started. The following morning, the lot searched the hotel-ship for clues. Kurapika found a diary that has stunning entries. It said that two calamities wallop the island every ten years. First, a tornado will whip the sea. Second, 24 hours after the first calamity, everything will drown. They were all flabbergasted by these entries but by the leadership of Kurapika and Hanzo and by their cooperation, they were still able to survive.

When the second calamity fled, the applicants were once again being rescued by the Hunter Association and were yet again left in an island. Before being abandoned, they were instructed to draw a number from a box. The task was to hunt down the hunter (called a target) who owns the number you drew and get his circular number plate. You must gather a total of six points in order to pass the test. Your own personal number plate and your target's both cost three points. Otherwise, if you can't obtain your target's number, you may steal three number plates which cost one point each from other applicants (non-targets). It's still quite catchy for you may be a predator, but still a prey. Only nine passed the test and among them, six were newcomers. 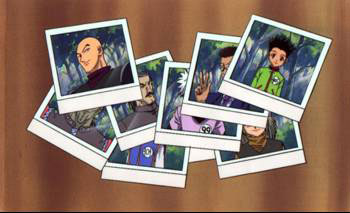 The last test, which was unexpected, was a tournament. When the Hunter Chairman showed everybody the diagram of the fights, everyone thought that only one would pass. But actually, it was the opposite - only one will fail among the nine. One of the rules is that if you'll kill your opponent, you'll be immediately disqualified and the rest shall pass. This was the part of the test where the mysterious applicant named Gitara Kuro revealed his true identity that made Killua go mad and brutal that he killed an applicant. To come to the point, only seven passed the 287th Hunter Exam.

The very final and secret test of the Hunter Association is the knowledge on Nen. It is the manipulation of our body aura. The Hunters fortuitously or coincidentally meet someone who knows how to use Nen that will teach him/her how. I really don't know if the Hunter Association intentionally scattered people with Nen to teach new Hunters. But these things are certain: Nen is a complicated power and all Hunters should learn how to perform it.