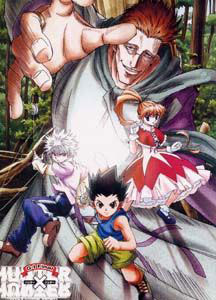 The gang had finally defeated the Spider. Now, Gon and Killua must continue their real agenda: to find Ging. To find Ging, they only found one answer: the game called Greed Island. Will they be accepted as players?

Gon was furious about what happened. Now, Gon and Killua must force themselves to become stronger within four days for them to be accepted.

Now the test begins. Chezguerra must see your "Ren." But what is "Ren" in Hunter Language? Seven people passed the test. Did Gon and Killua pass the second time?

The game has started. Gon and Killua must start from scratch for Ging did not left any clues. Wait! A man attacked Killua! What will happen now? Will he be like the man that exploded inside out?

Gon and Killua are being recruited by a group that wants to finish the game. These people promised that they shall divide the money that Mr. Battela will pay them if they will join the group and finish the game with them. Gon declined. So, Killua declined too.

The Sword of Truth was stolen by a group of players from Gon and Killua. What would they do? Of course! Go straight forward to Masadora. But be careful there are bandits and monsters around...

Bandits will take anything from you. Monsters have different levels. Gon and Killua use Gyou or do 200 push-ups! Go Biscuit Crugar! Beware, Mr. Scissors is out there!

Training time again with the master of their master. Mr. Scissors will help, right? Gon and Killua, train for two weeks with Mr. Scissors and Bisuke-chama so you'll improve! Ganbatte!