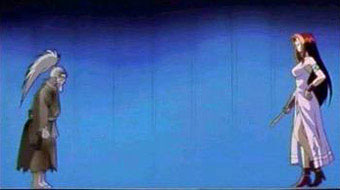 Shiju is a product of Genjuro's psychic surgery (amalgamation of a lion in a human's body). Lorcan had troubles in the fight because his weapon was thrown away. Four faces of the Cogan Angki were used in the match and the An was used to end it.

Gideon cheated on Lorcan that he earned the point for their team in no time (and he happened to transform himself into a tree!).

Lorcan was sucked into Gideon's body (now a tree) so it was difficult to fight without being cautious. Gideon used his trunks to attack and Dylan just kept cutting 'em. All of Dylan's effort is useless because the trunks always grow back after being slashed (another product of psychic surgery). As a final point, ice was able to stop Gideon and his trunks from growing.

Dylan did not fight because he does not want to hurt a girl (lucky Lina or what?).

Lina's ability to manipulate her hair is pretty impressive. She can simultaneously use it to attack Recca and defend herself from the flame. Lina was just doing it under Genjuro's orders because her father was shrunk and was made a hostage in an hourglass. When Recca knew this, he destroyed Genjuro's Nugen that was responsible for the change in size of Lina's father. The fight ended thereafter.

Genjuro has the ability to multiply his self and attack concurrently. When he had the chance to stab Recca with his sword, he did not do it. Instead, he used his ability as a psychic surgeon to steal one of Recca's flame dragons while confessing that he is not fighting for Kurei from the very start. He was merely trying to reclaim his honor that was once greatly lost to Kurei. Unluckily, the dragon he was able to take was Setsuna—a cruel and hateful dragon. A dragon commanded Recca to close his eyes (and so did Recca to the others) because if Setsuna catches one staring straight into his eyes, (s)he will be mercilessly burned. Genjuro did not believe Recca, watching the dragon with all amazement. He commanded the dragon to attack Recca but it did not follow him. As an alternative, it opened its eyes. Genjuro was finished pitifully. He then removed the Shikigami implanted in Lina's body. He was killed by Nayumi subsequently. A fourth mark appears on Recca's left shoulder, signifying that Setsuna's already under his command (he doesn't want it though).