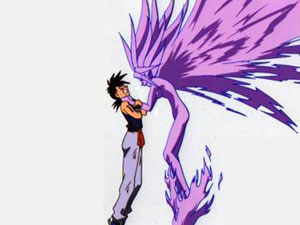 Nuroy is merely a dead body used by Bakujo. When Bakujo was defeated, he tried to take over Max's body but was unfortunate enough. Max destroyed the evil mask by the help of the Tetsugan.

Kai pretended that he was the one who killed Dylan's sister to see if Dylan is really worthy enough of replacing him as the heir of Kyosa Miguri. They use the same abilities and set of techniques because they were under a common mentor. When Dylan did not kill Kai when he had the chance, Kai was convinced. He then told Dylan the person who actually killed his sister. After it, he jumped off the cliff.

The real Mikoto immediately appeared after Aira's first attack. Aira was poisoned by the robot's nails and Mikoto took advantage of it by giving Aira hard hits. Unknown to her, Aira was able to get a nail from the robot. When Mikoto tried to do a finishing attack, Aira surprisingly pricked her in the neck. She panicked and got the antidote out but Aira stole it right away. The win was still for the Kurenai because Mikoto cheated.

Joker finished the fight by retreating even before the action has just begun.

Recca's first attack was quite impressive for it was a combo of three of the flame dragons. When Kurei performed Genjuro's multiplicity technique, Recca called Setsuna to find and burn the real Kurei (Setsuna is a blind dragon that has its own way of finding the true among fakes). When Recca called all the seven dragons, the eighth appeared and told him that whoever wins in the match will become his master. Kurei shaped his flame into a phoenix, and everyone was astonished for it symbolizes the sacred flame. He directed it to Recca but was still not enough to burn him. Augustus Mori, Kurei's father, then entered the scene with a clone Kurei. When the clone made a powerful attack, the two flame masters who happen to be brothers joined forces to destroy it. Augustus Mori escaped but Kurei caught him and burned him alive.