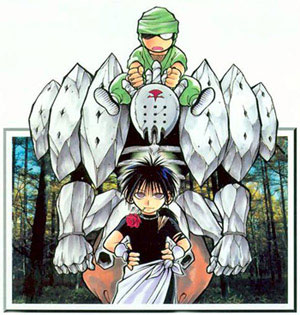 Tsukishiro is one of the good-looking guys in the animé (he even know it himself!). He first appears in a mummy getup before revealing his identity. Straightforwardly, he does not want his beautiful face scarred even the slightest bit. The fight started with a fast fencing between the two. Tsukishiro was able to give Lorcan a few blows and then turned his back. Lorcan kicked him and blood came gushing on one side of his head. It made him really mad that he was forced to use his special weapon—an invisibility cloth. He wounded Lorcan in the spine (ouch!) which resulted in too much blood loss. However, it was also the one that made Lorcan a victor. The spill of blood in the Oburu gave way to the visibility of Tsukishiro. Lorcan was able to give back some blows before collapsing. The fight was a draw. "But of course we know who the real winner is." -referee

Fight 2 - Kashamaru vs. Recca (with a good luck kiss from Tanya, the referee)

Kashamaru copied five of Recca's flame dragons and used it against him. By being able to stand after being burned by the fake Setsuna, Rui, a new dragon, gave Recca a riddle. When Recca gave the correct answer, she used her powers to fool and beat Kashamaru.

According to the announcer of the fight, this has got to be the best fight ever. When Gashakura's "Morning Star" was destroyed by Aira's "Fuujin Air Cutter", he used his true weapon—the Magagamba. Aira was able to evade into the outside the arena and got the best opportunity to end the fight when she was struck by the laser surrounding the battlefield. She was still able to win with the help of the Kosadama.

Magensha attacked Anna outside of battle while another Magensha was fighting Max. He failed because of the presence of Lorcan, Saicho, and Recca and so he decided to go back and face Max. Max surprised everyone when he punched the Homashin blast back to his opponent. It made a crack in Magensha's mask and Aira and the others defeated the true Magensha in the different dimension provided by the Jigenkaygyoko, the opponent's real weapon. Magensha was burned into ashes by Kurei after losing to Max.